This website (www.liquidityx.com/eu) is operated by Capital Securities S.A., a Greek Investment Firm, authorized and regulated by the Hellenic Capital Market Commission (“HCMC”) with licence number 2/11/24.5.1994. The Company is registered in Greece under GEMI with register number 31387/06/Β/94/18. Capital Securities S.A. is registered at 58, Metropoleos Street, 105 63, Athens, Greece.

CFDs are complex instruments and come with a high risk of losing money rapidly due to leverage. Between 74-89% of retail investor accounts lose money when trading CFDs. You should consider whether you understand how CFDs work and whether you can afford to take the high risk of losing your money. Past performance does not constitute a reliable indicator of future results. Future forecasts do not constitute a reliable indicator of future performance. Before deciding to trade, you should carefully consider your investment objectives, level of experience and risk tolerance. You should not deposit more than you are prepared to lose. Please ensure you fully understand the risk associated with the product envisaged and seek independent advice, if necessary. LiquidityX does not issue advice, recommendations or opinions in relation to acquiring, holding or disposing of any financial product. Capital Securities S.A. is not a financial adviser and all services are provided on an execution only basis. Please read our Risk Disclosure document. 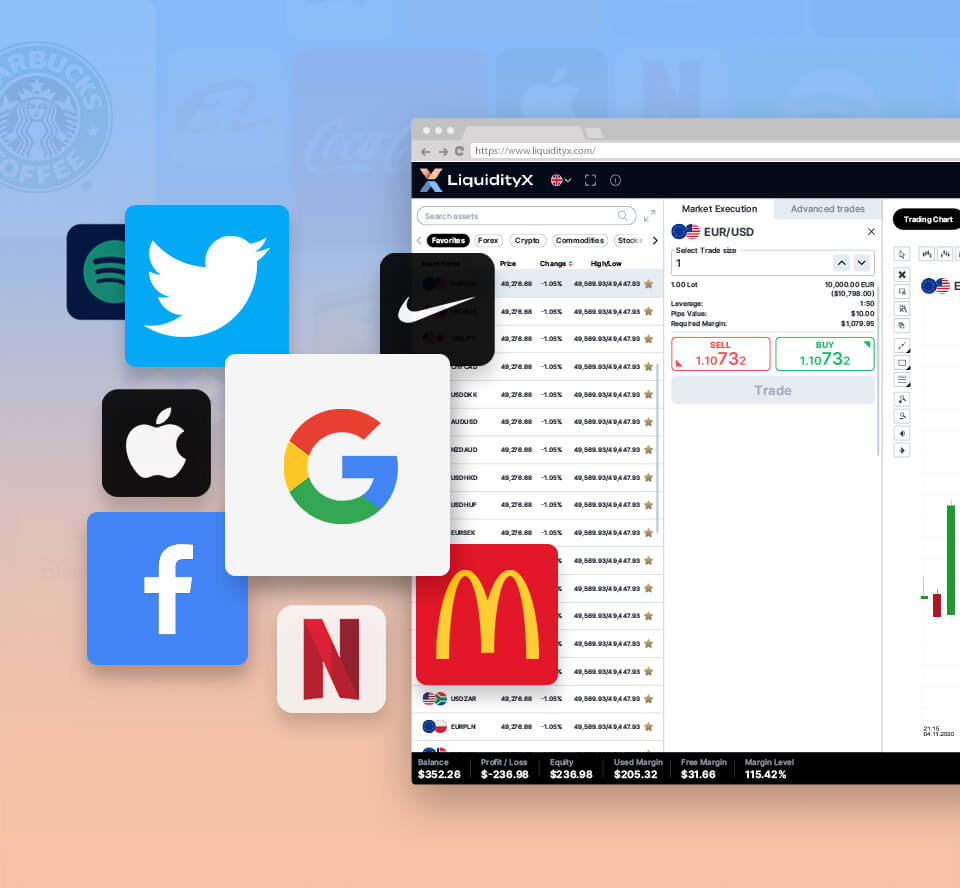 A cryptocurrency is money in an exclusively digital format. You may wonder why we need this; after all, your bank allows you to perform digital transactions locally and around the world while digital wallets like Skrill and PayPal give you the ability to forego banks for virtually unlimited purposes.

However, a cryptocurrency is capable of much more. LiquidityX looks at the basics of cryptocurrencies from the perspective of a potential investor.

In 2009, the release of the world’s first cryptocurrency, Bitcoin, intrigued many people. It alarmed even more. Established names in finance and banking said what they hoped would be true – that cryptocurrencies were just a fad and would soon disappear. The opposite happened; there are already over 2,000 different cryptocurrencies in circulation today.

Despite this exponential rise in number and gradual (although largely begrudging) mainstream acceptance, not many people truly understand how a cryptocurrency system works.

An Introduction to Cryptocurrency

First, the name. ‘Cryptocurrency’ is a portmanteau of the words ‘encrypted’ and ‘currency’. This is a reference to each unit of the currency containing encrypted information of its value and all the transactions in which it has been involved. This digital record is called the ‘blockchain’.

Next, cryptocurrencies are an exclusively digital medium of exchange. Unlike a traditional currency, there is no physical version of a cryptocurrency and all transactions are electronic. In this respect, cryptocurrencies foreshadow the cashless vision of society that has long been imagined by writers.

Third, cryptocurrencies are ‘mined’ in a way analogous to how central banks print currency. However, the mining process is much more complicated. Very powerful computers have to work endlessly to create a single blockchain that is the integral part of a cryptocurrency. This takes immense effort and resources.

The popularity of cryptocurrencies as an alternative means of payment and investment has fuelled over 2,000 different variations. However, the majority of transactions and almost all the value of the crypto market is limited to a few big players. Here are some that have left or are making their mark.

The first and by far the most popular cryptocurrency, Bitcoin is the brainchild of an individual in Japan who goes by the pseudonym Satoshi Nakamoto. When Nakamoto launched Bitcoin in 2009, his aim was to create a peer-to-peer payment network that would succeed platforms like PayPal because it had no fees.

It was the first use of the blockchain for this purpose. Bitcoin takes ‘blocks’ of information that record a transaction and, when the Bitcoin is used in another transaction, another block is added to the previous block(s), creating a ‘blockchain’. Bitcoin was created as a finite resource and Bitcoin mining will end after 21 million Bitcoins have been created.

Although Ethereum is a rather recent platform, having launched only in 2015, it is Bitcoin’s biggest rival. Ethereum tokens are called ‘Ether’ and it has the cryptocurrency world’s largest percentage share by market capitalisation after Bitcoin. Its appeal is that it offers more than just a currency but an entire software platform.

While Ether retains the blockchain foundation for functionality, the inbuilt versatility allows it to act as a replacement for apps, cloud storage and payment solutions. A self-contained ecosystem of this nature can potentially revolutionise how all transactions and interactions occur online. Ethereum’s other advantage is that its block mining process is significantly faster than Bitcoin’s.

Ripple is a crypto token created by Ripple labs since 2012. It also uses the retrospective transaction record to validate its coins like Bitcoin and Ethereum. Ripple’s unique selling point is its fluidity – unlike most other cryptocurrencies, it can handle transactions of almost any currency.

This feature has led to widespread acceptance in a way that has eluded its competitors, including being adopted by financial institutions. Already, Ripple is the third-largest cryptocurrency by market capitalisation. It is unusual in that XRP coins cannot be mined. 100 billion XRP were created at its launch and its creators say that no more will be issued.

How to trade Cryptocurrency CFDs?

Just a single token of the most popular cryptocurrencies is valued at thousands of dollars. This puts them out of the reach of most investors. For those who do have the capital to invest, regular price movements result in almost negligible investment growth. However, investors can make good profits on cryptocurrencies through CFDs, due to the fact that CFDs are leveraged instruments. Although leverage can amplify profits, it also amplifies losses

A CFD is a Contract for Difference. While a regular investment involves the purchase of a physical or digital product, CFDs speculate solely on the direction in which the value of an instrument will move. This means that you do not actually buy or sell anything; instead, you make an educated assumption of the derivative’s future price.

In this sense, you can make just as much money when the value falls!

The first step in trading cryptocurrency CFDs is to open a trading account with a reputable broker like LiquidityX. You do not require a separate digital currency wallet but can use your regular trading account to invest in all the products that we offer.

Research is an invaluable tool for investors. Use the LiquidityX Economic Calendar and current events to decide whether a cryptocurrency coin will change in value and in what period – a day, week or month. Use our online trading platform to place a CFD on the direction of the move and the system will deduct the relevant amount from your account and place it in the CFD.

Upon the maturity of the CFD, the system will check the relative position of the digital currency. If your speculation was correct, your investment and the profits are credited to your account. If the reverse happens, you will lose your investment and be liable for the cost of the CFD trade.

Please remember that trading on CFDs can incur losses in volatile markets. Invest and trade only with the money you can comfortably afford to lose.

What are the risks?

Cryptocurrencies work similarly to the currencies of sovereign nations such as the US Dollar, British Pound and Japanese Yen. However, they operate in an area beyond the traditional controls – and safeguards – of central banks and currency reserves.

The main concern for most investors considering investing in crypto is financial fraud. Despite sophisticated technology and security measures, there have been cases of hacked wallets. Take a considered approach, though. More companies have been caught fudging numbers than cryptocurrencies have been hacked.

In order to make a deposit, you first need to verify your account.
Your file has been rejected. Please contact customer support.
I understand

Free Demo
Live
×
I already have an account
*CFDs trading involves substantial risk and may result in the loss of your entire trading balance. CFDs are not appropriate for all retail traders.

We need a few moments to check your documents. Please do not exit this window until we’ll finish. Thank you.

Your file has been rejected.

All four corners must be visible.

Clear contrast between document and background.

Do not obscure any part of the document.

Upload with your smartphone

Apply to become a Professional Client in order to trade with your current market rates
Qualifying Criteria:

Based on the answers you provided in your previous questionnaire, you are not eligible to become a professional client. If there is an update in your status, you can update the questionnaire answers accordingly and you can be reconsidered.
Please keep in mind that in order to apply to become a professional client, you must meet the following criteria:

Your request is currently being reviewed by our team and will be ready shortly.

Once the status of your requested is decided, we will contact you with the details.
You can continue exploring the trading platform in the meantime.
What are payment methods?
What are insufficient funds?

This action is not available for a demo account.
Switch to your live account, add funds and start trading.

Set your amount and choose your preferred payment method
×

Please note that there is a minimum deposit of €500 for wire transfers.

You can also add a new card or choose to deposit funds using additional payment methods:

In case of your transaction has been declined, you can get an instant help from our customer support.

A customer with the same email address is already registered

Like all investment opportunities, trading Forex and CFD involves risk of loss. Here at LiquidityX, we provide you with access to an education centre, risk-management tools and a customer support team.